What are they going to think? Do I appear happy and do I make a good impression? If not, they are going to rate me badly on social media, it will ruin my image; I better smile and be nice. Let’s look at the page of the new person I just met.

Are these thoughts from Black Mirror or from someone in real life? The scary thing is, no one can really tell. The episode titled Nosedive was a mockery of modern individual’s obsession with appearance and how society puts too much emphasis on the effects of others’ ratings.

Who could have predicted that this would slowly become reality…this guy could. And by ‘this guy’ I mean Guy Debord – twentieth century French Marxist philosopher. The following article is inspired by Debord’s ideas expressed in his ‘Society of Spectacle’. In his book, Debord describes a society consumed into its own image, society in which a fine line between appearance and reality ceases to exist and these concepts mix within each other. Being Marxist, he defended his view with criticism of the rise of consumerism due to rapid economic growth after WWII. Of course such things as the internet and social media did not exist in his time, but his ideas now became more relevant than they were back then. Another philosopher to support his ideas was another French philosopher Jean Baudrillard (although Baudrillard expressed his ideas much more strongly, to the extent that his writings can be considered Nietzsche-ish doomsday prophecies).

The problem precisely is that society seems obsessed with their images: everyone tries to appear better off than they actually are and this, in fact, changes how they act. “But isn’t it better when the appearance of well being encourages the same lifestyle and worldview?” Well, it really is not. This approach reduces individuals into two-dimensional characters, caricatures of themselves. This also leads to shifts not only in media but also in politics, economics and advertisement. For example, the phenomenon of appealing to emotions has already led to the post-truth era of the media, the era in which there is not much space left for objectivity. Companies, in their ads, have started selling a certain image of the consumer rather than displaying the advantages of the product itself. The best example would be perfume ads in which celebrities are starring: by doing so, they try to say that by using their product the consumer would be more like Johnny Depp. Or Nike ad featuring Colin Kaepernick says that the consumer, by buying their product, would be relating to the views of an NFL star. In politics, the candidates try to appear as if they were part of a certain layer of society: Trump using short and simple language to relate to an average American worker, while Clinton tried to relate to ‘white collars’ by constructing an image of a person deeply involved in politics. It came to the point where in elections construction of a certain image became more important than pitching real policies. And in society, as Debord argues, it has led to a false need of necessity to constantly propagate one’s artificial image.

Art was also affected with such a shift towards consumerist culture. With a huge emphasis on appearance, art loses from its meaning. Artworks start to become devoid of meaning and to carry no purpose other than aesthetic one (of course there still is ‘high art’ but, in general terms, the common art is very different, and this leads to undesirable elitism in the art world). Thus the title of this article: Jay-Z ironically wearing gold chains and a t-shirt with an image of Che Guevara – a man well known for his anti-capitalistic efforts. But as soon as Che Guevara became a symbol in popular culture, everyone forgot who the man behind the image is.

One more example would be yet another episode of Black Mirror titled Fifteen Million Merits: the protagonist stands against the system by threatening to kill himself with a piece of glass; later he is reduced to a symbol in pop-culture of the episode, a part of the system he was protesting, a sell-out.

So, are we already lost in our own image? Will further art meet the fate of Bing from Black Mirror or Che Guevara? How much will appearance control reality? Or to phrase it in such a way to put a burden of responsibility on the reader, “How much will we allow appearance to control our reality?” 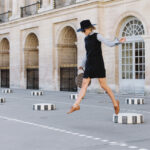