One of the highlights of my recent vacation in Istanbul was the visit to the Museum of Modern Art. Several artworks of various kinds – paintings, installations, videos – were particularly thought-provoking for me. Therefore, my next several articles are going to consist of those “provoked thoughts” about the Istanbul Museum of Modern Art.

This first one is about Mehmet Güleryüz; specifically, his two paintings titled “The Seaman” and “The Hunter”. My very first, openly filled with prejudice, thought was “wow, trying to imitate Van Gogh much?” I am not proud of that thought but on the look, you would see where I am coming from. I looked at the painting descriptions to support my rushed conclusion (by the way, it is a good practice to first just look at a painting to try to reach your own conclusion and only then to read the description to enhance the understanding, instead of doing otherwise). Indeed, the description did state that the style was expressionist, but no mention of Van Gogh was made. A bit confused, I have decided to take a closer look at the paintings. Only then did the difference reveal itself.

If Van Gogh’s expressionism used wavy lines of brush strokes to create the imagery, Güleryüz used the same wavy lines “on top” of already created images. It is especially evident in the way the sea was painted: first there is a layer of accurately painted water landscape, with cautiously mixed colors and smooth textures, and only on top of that were lines placed. With what purpose? One is that mastered by the Dutch painter – to create a sense of motion and fluidity. The other effect, intended or not, produces the impression of unity, with borders between separate objects being smooth and undefined, thus emphasizing the whole instead of distinct. In other words, the artist “lowered the resolution” of the initial image for artistic purposes, in contrast to Van Gogh who created the image that way in the first place.

But it was not only the technique that impressed me. I also want to briefly mention the contents. In the description, it is written that these two paintings “portray individuals struggling alone in the middle of nature, against a force that is bigger than them”. I would like to partially disagree with that statement. Although it is true that there the nature is a “force bigger than them”, and maybe that they are struggling, but are they really against the nature? As I wrote in the previous paragraph, this particular technique of expressionism unifies and blends the objects into one continuous whole. I doubt that this was done for the sake of aesthetics only. In both images, the protagonists are integrated into the force of nature, they are of the same color; in fact, the seaman is barely even visible.

I do support the point about the struggle but for me it is more complex than that. The center of “The Hunter” is the man’s strong gripping hand of exaggerated proportions. This might have been an intentional reference to Picasso’s “Night Fishing at Antibes” in which, similarly, the center of attention is the fisherman’s strong grip. This for me signals not a miserable struggle but a bold quest for challenge.

The same is applicable for the seaman. His barely-visible silhouette stands (somewhat contrary to logic) in the middle of the uneasy sea, far from his ship. Despite every muscle in his body seeming tense, he stands confident and even slightly leaning back. That is beyond a simple application of power for a task. That is an intentional display of strength for the sake of manifesting that strength.

Therefore, one can conclude that a better description might talk not of “a struggle against nature” but of “self-inflicted challenge in a gentlemanly competition with nature”. 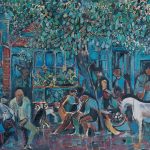 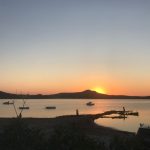