No, this one is not about the streets per se. This article is about the representations of Turkish streets by two different artists – Eren Eyüboğlu and İhsan Cemal Karaburçak – through their paintings “Beylerbeyi” (1970) and “Abstract Landscape” (1964), respectively. A good way to start the comparison would be to compare the artists themselves.

The first similarity is the reason this article is written: both were displayed in the Istanbul Museum of Modern Art at the time I visited it. Surprisingly, these two artists’ backgrounds are very much alike; both lived and created in the same period (from early to late twentieth century), both spent their formative period in Parisian art institutions (Karaburçak received education at the Ecole Universelle and Eyüboğlu worked in the Andre Lhote studio), and both were deeply influenced by the works of Cezanne and Matisse. On the other hand, their major difference was in their nationality. Eren Eyüboğlu was Romanian and her original name was Ernestine Leibovici; she changed her name after marrying the Turkish artist Bedri Rahmi Eyüboğlu. Unlike her, Karaburçak was ethnically Turkish who spent most of his life in Istanbul and Ankara. I consider this difference to be key, since it may partially explain their visions of regular Turkish streets.

First, let’s go over “Beylerbeyi”. It was mentioned earlier that Eyüboğlu drew inspiration from Cezanne and Matisse. In fact, the exhibited description of the painting puts it this way: “Influenced by Cezanne and Matisse during her Paris years, she was particularly attracted to the latter’s approach to color, which she made a part of her own “folkloric” language of expression”. Although I am in no position to argue what the artist herself expressed, I may still argue that, contrary to what is written, this specific painting has more of Cezanne than Matisse. The most famous works of Matisse capture attention with their sharply bright colors and their strong contrast. “Beylerbeyi”, in contrast, is relatively monochromatic. Moreover, just as Cezanne did in his landscapes, Eyüboğlu prioritized and emphasized nature. The biggest by area and the most detailed part of this painting is the tree that occupies most of the upper left corner of the canvas; its leaves are outlined and highlighted with detail, compared shapes of the building or human figures. The other part that catches the most attention is once again an element of nature – a white little horse (or possibly donkey) in the lower right corner.

So where does the ethnic difference come into play, you may ask at last. It is in the depiction of the people: two boys on the left wearing sleeveless jackets, an old lady with a white headdress, predominantly darker skin tone, the act of crouching or sitting down in the middle of a busy street. It is in the primary color: most of the people to the right, the main color of the building and the leaves – turquoise. These two, especially the name of the color that was most probably chosen on purpose, give a strong impression of European orientalism. It is of course wrong to argue that orientalism was expressed here with a derogatory intent. No, the intent was the complete opposite of that – the artist expressed her admiration; we can be confident in that, taking into account that Eyüboğlu expressed that Turkey was her home. Still, regardless of the intent, it is obvious that the painting was done by a foreigner, a stranger.

Now let’s get to “Abstract Landscape”. The first and the most obvious difference lies in the fact that Karaburçak set his depicts the night rather than day. The lights are off and the city is asleep. Here we feel melancholic comfort, as opposed to Eyüboğlu’s excited unfamiliarity. The artist knows these streets, he doesn’t need the people to add anything to them, not even daylight to reveal their hidden features. The landscape is composed of vaguely shaped windows, street signs and other possibly misplaced elements that might or might not be there in actuality. It is a memory; not the kind of vivid memory left by an impression but the kind that we sort of have of places we visit every day. Paradoxically, those should be the most precise because of their familiarity and frequency, but we can rarely be certain of, for instance, the pattern on the kitchen carpet of our own home. These streets on the painting are the memory of the pattern on the kitchen floor of Karaburçak’s home. Knowing all so well to the point you don’t need to remember is arguably the main idea of the painting. Karaburçak finds beauty in what is ordinary, while Eyüboğlu finds fascination in what is alien. The ordinary, the alien – the same Turkish streets. 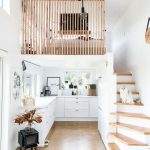 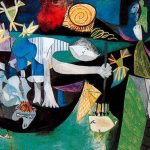