How It Felt Inside Hopper Painting

Edward Hopper was an American realist painter of the early and mid-twentieth century. He is most famous for his oil portraits. In the following article I am going to discuss my favorite painting by Hopper – ‘Nighthawks’ – and why the feeling it radiates is so similar to the one most of us might have had during quarantine.

Hopper didn’t want to be known only as a contemporary artist, as the one representing his thin slice of time. That is why his dominant theme was ordinary people doing ordinary things. Also, that is why the ‘Nighthawks’ has no relation to the time period it was produced – 1942, right after the Pearl Harbor attack. The painting represents normal people sitting at a diner at night. Although Hopper was a realist, he left out a lot of details in his paintings. For example, in none of his paintings, including ‘Nighthawks’, the viewer can feel the presence of windows. As if they were not there, as if the viewer could hop straight into the setting. However, Hopper was very careful about lighting, shades, and angles. This mixture of realism and lack of it creates an interesting feeling of presence/isolation.

What adds to it is also the distant gazes of the subjects. Although the man and the woman at the counter sit very close to each other and their hands seem to overlap, at the closer look it is seen that they do not touch. As if they are somewhat in between being complete strangers and estranged for the moment. Moreover, the looks of any of the subjects don’t overlap. They are sitting at the diner, only them and no one else at that hour, but all of them are so distant, enclosed within themselves. And the viewer as well is isolated; the perspective makes one feel as if he was only crossing the street and has a glance at the central subject.

Light of the diner is the only light that exists within the painting. It is supposed to make the viewer feel as if it is the place where life is. However, looking into the diner, the viewer discovers it to only be a place inhabited by disinterested strangers. The strangers isolated from the entire dark world, and within that isolation also enclosed into unexplainable worlds of each own.

That feeling of isolation within isolation is exactly what it felt like for me during quarantine; being locked in a place that is supposed to be a piece of lively light, a safe place, but also completely ignoring its being and people sharing that environment. And that is probably how Hopper felt during the making of the painting being both amidst ongoing World War and his self-isolated studio in Greenwich. 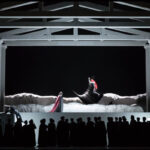 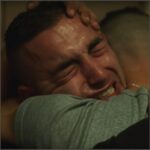