Francisco de Goya is one of the most prominent Spanish artists of the late eighteenth and early nineteenth centuries. All of his early works carry some “rococo style” style in them, meaning that they had bright colors, were “academical”, looked theatrically aesthetic and had some playfulness. Also, Goya painted the baroque style portraits for royalty, for whom he worked for the rest of his life. Here is one of the Goya’s early paintings from the time he worked in Royal Tapestry Factory titled La Vendimia or The Grape Harvest:

In it all the elements of the aforementioned rococo style are visible. The subjects around which the painting is centered are posing with theatrical expressions, dressed festively, their faces are careless and happy, they are not lit but blessed lit with sun.

Then, in 1793, Francisco de Goya got an unknown illness which left him deaf. Ever since that time his mental health started deteriorating and his paintings got much darker.

The painting above was finished just a year after Goya went deaf, in 1794. It is titled Courtyard with Lunatics. A moment, a brief look, is more than enough for one to conclude that it is the exact opposite of La Vendimia; the primary colors are black and grey, facial expressions are demonic, bodies clenched and tense, the sunlight does not illuminate the scene but provides a contrast that emphasizes the darkness.

At the same period of struggle with disease, Goya also produced a series of etchings which shared the same topic: ghosts, monsters, witches and other creations of ill imagination.

Then happened the invasion of Spain by Napoleon, by which Goya was inspired to produce a series called The Disasters of War. Although it contains brutal and violent imagery of war (in contrast to baroque paintings in which war was glorified), I am more interested in showing arguably the darkest paintings created in history of art. They were produced as murals in Francisco de Goya’s retreat (or more like isolation) after the war in Quinta del Sordo. The series that is referred to as the Black Paintings. A total of fourteen murals with depictions of horrifying scenes straight out of the most wicked nightmares. The one below is called Saturn devouring his son.

A little background: The person eating the child is Cronos (Saturn in roman mythology). According to prophecy, he was destined to be murdered by his own child. So, every time he had a child, Cronos swallowed it whole (except that one time when Zeus was born in secret, actually killed him and ended the reign of the Titans).

On the first look at the painting, we see someone looking back at us. Just like we caught someone having a midnight snack and made an awkward eye contact. In mythology Cronos devours children as a whole and they are still alive in his stomach. On the painting, though, we “catch” him at the moment when he is about to bite an arm at a joint, which makes it much more gruesome. What Saturn is eating looks not like a newborn but a developed child who was understanding what happened and probably struggled. With his eyes crazed and at the same time madly scared, Saturn digs his hands into the back of his own child as if in a hurry to conceal the deed.

This painting had many interpretations (which are probably more profound than “the awkward midnight snack”), as did the other thirteen other murals. What makes them so scary, though, is that they were not meant to be interpreted. Francisco de Goya painted them on the wall of his own home. They were not meant to be shown to the public, he just expressed the product of his imagination that has gone beyond mad at that point. This what makes the Black Paintings so scary. 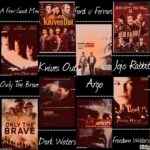